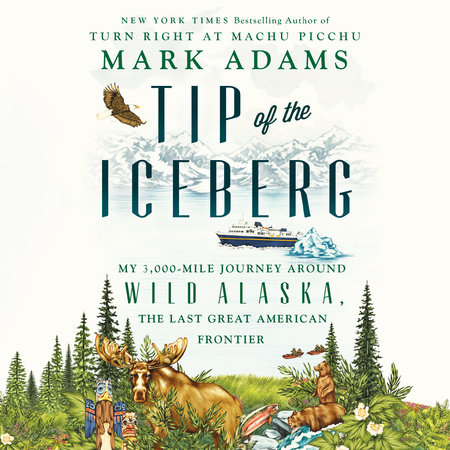 From the acclaimed, bestselling author of Turn Right at Machu Picchu, a fascinating and funny journey into Alaska, America’s last frontier, retracing the historic 1899 Harriman Expedition.

In 1899, railroad magnate Edward H. Harriman organized a most unusual summer voyage to the wilds of Alaska: He converted a steamship into a luxury “floating university,” populated by some of America’s best and brightest scientists and writers, including the anti-capitalist eco-prophet John Muir. Those aboard encountered a land of immeasurable beauty and impending environmental calamity. More than a hundred years later, Alaska is still America’s most sublime wilderness, both the lure that draws a million tourists annually on Inside Passage cruises and a natural resources larder waiting to be raided. As ever, it remains a magnet for weirdos and dreamers.

Armed with Dramamine and an industrial-strength mosquito net, Mark Adams sets out to retrace the 1899 expedition. Using the state’s intricate public ferry system, the Alaska Marine Highway System, Adams travels three thousand miles, following the George W. Elder‘s itinerary north through Wrangell, Juneau, and Glacier Bay, then continuing west into the colder and stranger regions of the Aleutians and the Arctic Circle. Along the way, he encounters dozens of unusual characters (and a couple of very hungry bears) and investigates how lessons learned in 1899 might relate to Alaska’s current struggles in adapting to climate change.

Tip of the Iceberg is one of the better travelogues I’ve read in recent years. It vibrantly conveys Alaska’s sights and describes Adams’ own encounters there with insight and humor. I highly recommended the book, especially for armchair travelers and those interested in the history and nature of this unique land.