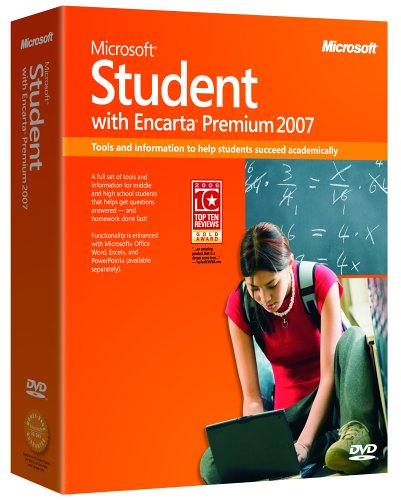 While Microsoft Encarta Premium 2006 marked Microsoft’s commitment to the  Web – Microsoft Encarta Premium 2007 marks its commitments to its own technology. The new Encarta relies on Microsoft’s powerful, flexible, scalable, and adaptable .Net Framework 2.0. There is a price to pay, of  course: the time it takes to install the product is much longer and the user is henceforth prompted to constantly download security updates from  Microsoft. It is also recommended to turn off your firewall and anti-virus  products during installation.

More than ever, the Encarta is a breathtaking resource. With 68,000 articles (compared to 64,000 last year), it is much expanded (though about 1000 photos and illustrations and 500 music and sound clips were removed from this edition). Certain, resource-hogging features disappeared from last year (for example: the Read Aloud and Live News functions).

The Encarta caters effectively (and, at $30-50, affordably) to the educational needs of everyone in the family, from children as young as 7 or 8 years old to adults who seek concise answers to their queries. It is fun-filled, interactive, and colorful. Kids have their own encyclopedia-within-encyclopedia, dubbed Encarta Kids with age-appropriate, appetizingly presented content and games to boot!

The 2007 Encarta’s User Interface is far less cluttered than in previous editions. Content is arranged by topics and then by relevancy and medium. Add to this the Encarta’s Visual Browser and you get only relevant data in response to your queries. The Encarta Search Bar, which was integrated into the product two years ago, and is resident in the Task Pane even when Encarta is closed, enables users to search any part of the Encarta application (encyclopedia, dictionary, thesaurus, etc).

The Encarta’s newish Web Companion obtains search results from all the major search engines without launching any additional applications (like a browser). Content from both the Encarta and the Web is presented side by side. This augmentation explicitly adopts the Internet and incorporates it as an important source of reference.

I am not sure how Microsoft solved the weighty and interesting issues of intellectual property that the Web Companion raises, though. Copyright-holders of Web content may feel that they have the right to be
compensated by Microsoft for the use it makes of their wares in its commercial products.

Encarta would do well to also integrate with new desktop search tools from Google, Microsoft, Yahoo, and others. Users should be able to seamlessly access content from all over – their desktop, their encyclopedias, and the Web – using a single, intuitive interface.

The Encarta Premium includes a dictionary, thesaurus, chart maker, searchable index of quotations, games, Discovery Channel videos, 25,000 photos and illustrations, 2500 sound and audio clips, hundreds of maps and tables (with a staggering 1.8 million map locations), and 300 videos and animations. It incorporates numerous third-party texts and visuals (including hundreds of newspaper articles and a plethora of Scientific
American features).

The Encarta is augmented by weekly or bi-weekly updates and the feature-rich online MSN Encarta Premium with its Homework Help offerings. Unfortunately, the Encarta still conditions some of its functions – notably its research tools and updates – on registration with its Plus Club. Moreover, last year Encarta released only 26 updates, compared to its annual average of 50-60.

The Encarta is the most comprehensive, PC-orientated reference experience there is. No wonder it has an all-pervasive hold on and ubiquitous penetration of the child-to-young adult markets. Particularly enchanting is the aforementioned Encarta Kids interface – an area replete with interactive quizzes, pictures, large icons, hundreds of articles, and links to the full version of the Encarta. A veritable and colorful sandbox. Those kids are going to get addicted to the Encarta, that’s for sure!

Encarta actively encourages fun-filled browsing. It is a riot of colors, sidebars, videos, audio clips, photos, embedded links, literature, Web resources, and quizzes. It is a product of the age of mass communication, a
desktop extension of television and the Internet.

Inevitably, in such a mammoth undertaking, not everything is peachy. A few
gripes:

As I said, installation is not as easy as before. The Encarta 2007 makes use of Microsoft’s .Net technology. As most home computers lack it, the installer insists on adding it to the anyhow bloated Windows Operating
System. There is worse to come: the .Net version installed by Encarta 2007 is plagued with security holes and vulnerabilities. Users have to download service packs and patches from Windows Update if they do not wish to run the risk of having their computers compromised by hackers.

Fully installed on the hard disk, the Encarta Premium 2007 gobbles up less than its predecessors but still a whopping 3 Gb. That’s a lot – even in an age of ever cheaper storage. Most homesteads still sport PCs with 20-40 Gb hard disks. This makes the Encarta less suitable for installation on older PCs and on many laptops.

The Encarta DVD 3-D tours have improved but they still hog computer resources and are essentially non-interactive. Is it worth the investment and the risk to the stability and performance of the user’s computer?

The Encarta tries to cater to the needs of challenged users, such as the visually-impaired – but it is far from doing a good or full job of it.

The dictionary has been greatly improved in this edition. Actually, the Encarta 2007 comes equipped with five foreign language dictionaries and verb conjugating applications. Still, the atlas, English language dictionary, and thesaurus incorporated in the Encarta are somewhat outdated. Why not use a more current – and dynamically updated – offering? What about dictionaries for specialty terms (medical or computer glossaries, for instance)? The Encarta’s New English Dictionary dropped a glossary of computer terms it used to include back in 2001. All’s the pity.

But that’s it. Encarta is a must-buy (especially if you have children). The
Encarta is the best value for money around and significantly enhances you
access to knowledge and wisdom accumulated over centuries all over the
world. The amount and quality of content squeezed into a $50 package (before
rebate) defies belief. I am a 45 years old adult but when I received my
Encarta Premium 2007, I was once more a child in a land of wonders. How much
is such an experience worth to you?